On World Malaria Day, MINSABS works to achieve its elimination by 2030

25 Apr On World Malaria Day, MINSABS works to achieve its elimination by 2030

Posted at 19:15h in Health, Noticias by Admin 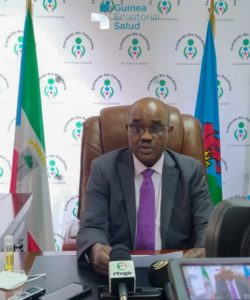 On World Malaria Day (April 25), the Minister of Health and Social Welfare, Diosdado Vicente Nsue Milang, highlighted that the Government of Equatorial Guinea, through the National Program to combat Malaria of the Ministry of Health and Social Welfare (MINSABS) and the Bioko Island Malaria Elimination Project (BIMEP), is working to achieve its elimination by 2030, “in 6 countries of the subregion, the number of cases decreased by 97%, between the years 2000 and 2020 ”. Even so, in Equatorial Guinea, malaria continues to represent the major cause of morbidity.

The prevalence continues to be high in the continental region (46%) and in Annobón (24%), but work is being done on the implementation of activities to combat malaria, free of charge, making available in all hospitals, centers and posts of public health, of mosquito nets impregnated with long-lasting insecticide, the 3 medicines for simple and complicated malaria, intermittent preventive treatment for pregnant women and the diagnostic test. “A series of measures that will help to reduce morbidity and mortality in children under 5 years of age and pregnant women,” added the Minister of Health.

“We ask for the support of political decision makers, the private sector, civil society, the academic community and the general public, to join forces and take the coherent and necessary measures that protect the families and communities of our country against this sickness”. To achieve the goal of Zero Malaria, the Minister of Health and Social Welfare also urged the entire population not to resist the activities carried out by the program in the communities during this period of pandemic.