Posted at 20:41h in Health, Noticias by Admin 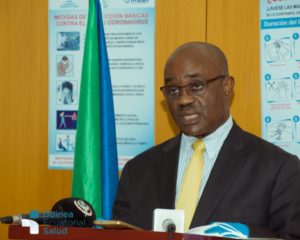 The National Technical Committee for Surveillance and Response to COVID-19 in Equatorial Guinea, under the direction of the Ministry of Health and Social Welfare (MINSABS) and with the support of the World Health Organization (WHO), organized last Saturday 16 In January 2021, a press conference (the thirteenth during the pandemic) to present updated epidemiological data on the evolution of COVID-19 in the country, corresponding to the period between December 31 and January 15, 2021.

The MINSABS communicated in the press conference that, after the meeting of the Political Committee held last Thursday, January 15, under the leadership of the president of said committee, HE Don Teodoro Nguema Obiang Mangue, and after several deliberations on the current epidemiological situation in the country, it was decided to continue with the measures contained in presidential decree No. 107/2020 for a period of 30 days (from January 15 to February 15, 2021).